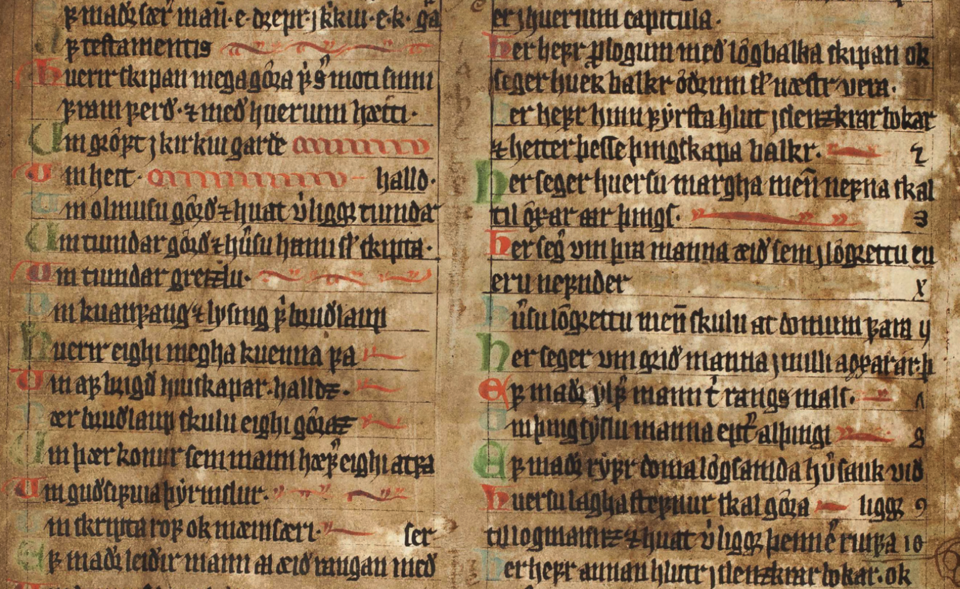 In this workshop we wish to explore networks and interactions between episcopal sees and monasteries in Iceland and Sweden in the fourteenth and fifteenth century as they are reflected in the textual transmission. While the past twenty years have prompted several studies on monasteries as centres of written culture in medieval Scandinavia, so far, no in-depth study has been presented as to the role of episcopal sees in the promotion and development of written culture in the North. The only exception to this are preoccupations with the archiepiscopal sees. Here, in particular Nidaros has repeatedly been discussed as centre of learning and among others as “arnestad for Olavslitteraturen”. Also royal and urban literacy has increasingly received attention. The activities of the episcopal sees have however so far been rather neglected in the evolving discussion of literacy practices in the North. This is even more surprising as the state of research for continental contexts as well as England suggest the crucial role of episcopal sees as centres of innovation of literacy techniques.

This workshop proceeds from this finding and wishes to induce a preoccupation with the role of the episcopal sees in the introduction and promotion of (Latin) literacy by means of studying them as part of a network of multiple agents. In a first step we want to highlight the relation to and interaction with the rather well-studied monastic context to sound out relevant perspectives for interdisciplinary approaches to the complex agencies and practices at work in the development and establishment of medieval written culture.

We wish to conjointly discuss Swedish and Icelandic material to bring together the expertise established for both regions. We hope that a comparative perspective will help to identify peculiarities as well as commonalities in the two regions. For Sweden, the workshop will focus on the diocese of Skara. For the Icelandic case both episcopal sees – Hólar and Skálholt – will be covered. Apart from dissimilarities grounded in the different political systems of the two kingdoms and archdioceses, we expect that some of the differences will be grounded in the different sociopolitical setting of the Icelandic and the Swedish episcopal sees, such as the lack of towns in Iceland and the remoteness to both the archiepiscopal see in Nidaros as well as to the royal court. Differences might also be rooted in the predominant monastic orders present in a diocese (Cistercians for Skara, predominantly Benedictines for Hólar and Augustines for Skálholt).

1) agents and practices of communication between the episcopal sees, monasteries and other social players,
2) the introduction of new media, genres and literacy techniques and the agents involved in these innovations
3) practices of using and keeping of written artifacts (e.g. organization and “responsibilities” of scriptoria, libraries and archives).

10:30-11:15   Gottskálk Jensson (University of Copenhagen): The collaboration between the episcopal sees of Iceland and the Benedictine order in the production of native episcopal lives and liturgical works in Latin
Abstract

15:30-16:15   Alessandro Palumbo (University of Oslo)/ Anna Blennow (University of Göteborg): The runic and Latin epigraphic areas of the diocese of Skara 1100–1500: continuity and change
Abstract

16:15-17:00   Jonatan Pettersson (University of Stockholm): Printing technology in the Church and the monasteries
Abstract

09:00-09:45   Anders Winroth (Yale University): The reception of European canon law in Skara and in Iceland
Abstract

14:00-14:45   Lena Rohrbach (Universities of Basel and Zürich): The Making of an Archive. Textual Practices in Hólar and Skálholt in the Late Middle Ages
Abstract